If Microsoft want to get rid of IE6, they’ve got to go local

A software developer actively discouraging people from using their software is a rare thing, but this is exactly what Microsoft are doing with their new “Moving the world off Internet Explorer 6” campaign. 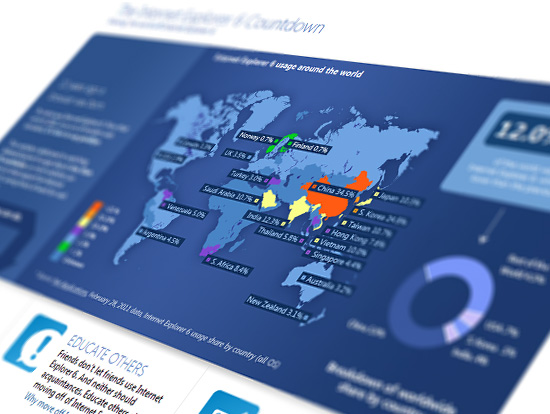 Well… in fairness it isn’t like they’ve just decided to get all culpable on us… rather this is part of a neatly viral campaign to get people switched on to IE9 by targeting web designers and developers. Presumably they thought having four variants of their browser kicking about in the wild could lead to confusion. Nevertheless the tone of the campaign is endearingly disarming, with the company even going as far as issuing tongue-in-cheek apologies at developer conferences.

The Internet Explorer 6 Countdown site claims it is “dedicated to watching Internet Explorer 6 usage drop to less than 1% worldwide”. So is that something a campaign like this can realistically achieve? Or is it just an attempt to win back some goodwill in the web community?

At first glance the stats displayed on the site all seem very compelling. The UK, the rest of Europe, Australia, NZ and the US all seem to be within arm’s reach of the goal, which means the end of IE6 is surely on the horizon. Except of course for those orange and yellow-tagged countries. Those orange and yellow-tagged countries that according to the worldwide share figures account for… er…  well over half of the current IE6 users out there. Which means that Microsoft’s campaign is basically preaching to the converted. Specifically, the western, predominantly English-speaking converted.

In fact, if our rather wonky maths is correct (and given that we’re web developers and not statisticians there may be some scope for error!), and assuming the rate of usage decline is consistent with previous years, it seems that the IE6Countdown site will need to be going for at least the next three years before Microsoft even get close to that goal, thanks to the weighting from the Eastern regions.

So why does IE6 remain so active in these areas?

The industry many of our clients are in means that our sites receive a lot of traffic from Asia, and a quick look at the analytics of some of the busier websites makes for quite enlightening reading, specifically when it comes to language preferences. In China for example, our stats show that around 75% of all visitors have their operating systems set to “zh-cn” (i.e PRC Chinese). Similar stats can be seen in Japan, South Korea and India. Which of course is exactly as it should be… people use computers in their primary language. English may be “the language of business”, but it would be ridiculous to assume it would also be “the language of computers”.

What that  means though is that users in non-English (or more broadly non-Latin languages) are being largely disregarded by campaigns such as this. Would you be inclined to a promotional banner at the top of the page, or an advert block on the right of a blog, when you were already reading the main contents in a second language – however fluent? No, of course not. Why would you? You’ve got better things to be getting on with. And as a result the IE6 campaign as it stands at the moment is destined to be targeted purely at an audience already well-versed in the issues. For Microsoft to really get to grips with the problem they need to do adopt a more localised approach, with targetted, language- and culture-specific campaigns, and find out the real reasons why computer users in such tech-industry-leading countries are so reluctant to upgrade their browsing experience.

So Microsoft may be jokingly washing their hands of IE6, but it is still their problem, and one that no amount of light-hearted IE9 promotion will fix. Until they’ve solved that problem, those of us involved in the design and construction of corporate websites with a global audience must continue to ensure that IE6 users are given the best possible user experience the ten-year-old software will allow.