The IoT is not new. It’s essentially been with us since the first computers connected to the first networks. But from conceptual beginnings to real-world implementations in a few short years, it’s expanding at such a pace that its implications are hard to keep track of.

When the phrase IoT first began circulating, much was made of its potential. But a technology that can help with virtually everything is no use until someone figures out the specifics of exactly what it can help with, and how. As Mark Hung of Gartner Research put it:

“Initially, leaders viewed the IoT as a silver bullet, a technology that can solve the myriad IT and business problems that their organizations faced. Very quickly, though, they recognized that without the proper framing of the problems, the IoT was essentially a solution looking for a problem.”

As time went on, of course, proofs of concept emerged, followed by commercial/production deployment, and we gained a better picture of what IoT was actually going to help us with. Collection and application of data is where IoT excels, allowing us to have smart factories, offices, cities and homes. Automation of transport, haulage and industry is coming into play. Agriculture & farming benefit from IoT, as does healthcare, and consumers, with wearable technologies. And the list goes on, but these are now tangible things that exist in the real world, not just ideas. 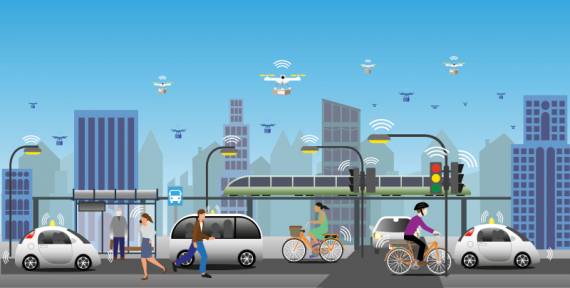 And we’re still only at the beginning of this journey. The stats surrounding the expansion of IoT are staggering. It’s predicted that there will be 41 billion IoT devices by 2027; and it’s reckoned that another 127 devices are connected to the internet every second. Those numbers don’t really register, of course. They just fall into the general category of ‘big numbers’. So let’s give it some context. There’s about 7 billion people on earth, so that’s five times as many connected devices as there are people. Or maybe that’s not so hard to imagine, living in the western world. Okay, how about this: a million seconds is 12 days. A billion seconds is 30 years. A million of anything is a lot. A billion of anything puts me in mind of Douglas Adams:

“Space is big. You just won't believe how vastly, hugely, mind-bogglingly big it is. I mean, you may think it's a long way down the road to the chemist, but that's just peanuts to space”

Humanity is great at innovating, and inventing things. Where we fall down is that our pace of innovation sometimes threatens to outstrip our ability to manage what we’ve invented – or at least it has in the last half a century or so. We know that things will scale fast, but we don’t really internalise that fact or plan sufficiently for it - possibly because most of us are incapable of envisaging what a billion looks like.

So IoT, in common with the internet on which it rests, is a little bit “wild west” in places. It’s a new frontier, whose possibilities and risks we still haven’t yet fully understood. The forefront of these risks is security. More devices and more connections = more attack surface. And out there at “the edge”, there are places where security is being neglected. Devices whose only job is to monitor the temperature in a fish tank, and yet which are implicated in data heists. When your data starts leaking out of your fish tank thermostat, there are some things that need re-thinking.

“The pace of innovation has generated requirements for millions of devices, most network connected in some capacity. Unfortunately, most of these devices have little or no protection at the software and infrastructure levels.” Earl Perkins, Gartner Research Vice President

Understanding how to balance the opportunities presented by IoT against the security challenges is definitely an area for improvement, but we are starting to catch up with ourselves.

One of the delights of working with tech customers at Freshleaf is that we get a glimpse into their goals, and the real-world problems that they’re helping to solve. Just this year, we’ve had the opportunity to work with Arm and its PSA Certified programme, which is driving forwards standards in IoT security, from the silicon and the software all the way up to the device. The scheme aims to build an ecosystem of in-built trust, which will help to ensure security right the way across the IoT.  And we’ve also worked with Foundries– a start-up/scale-up offering a unified end-to-end solution to the problem of developing, deploying and maintaining secure IoT products; a challenge that’s otherwise managed via a patchwork of fragmented approaches.

And once in a while it’s just nice to take a step back from building websites, and look at the bigger picture of human innovation, and some of the ways we solve the problems that we create for ourselves.