The HTML5 logo from a designer’s perspective 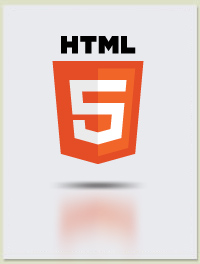 Discussions about logo design are no longer contained to design agency walls. A case in point is the Olympic logo, with a reach that affects a wide range of people, and which has been criticised from the outset. Witness also the recent brand review by GAP, and the u-turn following overwhelmingly negative public response. So when a new logo is launched into a community — especially a community with very vocal opinions on design and a limitless set of platforms from which to voice them — the designers had better be 100% certain the logo is up to the job!

The W3C have recently launched a wide-reaching branding identity for HTML5, the newest kid on the web standards block. At the heart of this is a striking new logo, the intention being to extend awareness of the HTML standard to as broad a reach of people as possible. How then should we be reacting to the new logo? Is it up to the job?

From a design point of view, the HTML5 logo is a bold statement of solidarity, using shield, badge and keystone imagery. The colour orange has been used historically to symbolise organisation and mobility. Psychologically it is considered to stimulate activity and socialisation, and used on things like traffic cones and construction signs in many countries to denote “safety”. This all helps to reinforce the message that the HTML5 standard is there to help us, not restrict us. The design has a limited colour pallet, and a refreshing lack of gimmicky features (glossy sheens, inner shadows) that could age the logo quickly. Indeed, the logo already has a slightly retro-Soviet feel to it. We’re quite sure any similarity with a certain toy range of transforming robots is purely coincidental though!

The logo is also licensed under Creative Commons, which means the design can be re-appropriated and modified. This is a brave step for any brand, and it is encouraging that the W3C recognise the importance of creating a flexible brand, particularly given the industry it is targeted towards. Google did similar with their Android logo, the net effect being that the users of the brand rapidly adopted the quirky logo as their own, and managed to create a far wider-reaching identity and brand family than Google would ever have managed on their own.

Developers need confidence in any new standard before they will embrace it fully, and HTML5 is one worth embracing. It helps alleviate some of the issues surrounding browser inconsistencies, multi-platform deployment and media integration (with the much talked-about video and canvas tags). And whilst HTML5 isn’t going to totally replace the role of plug-ins such as Flash in the web, it will help give more choice to developers, particularly when it comes to Apple’s webkit-based platforms. Branding HTML5 so distinctively will help to build that confidence. And if the eye-catching logo extends beyond the design community’s attention and captures the public imagination that can only be a good thing.

Logo design is certainly evolving, and the broader more community-minded approach take by the W3C in developing HTML5 logo is a welcome part of the change.